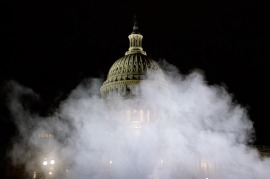 The white supremacist movement has become a top counterterrorism concern in the United States and in many other countries. White supremacists have conducted numerous high-profile attacks and, compared to jihadist terrorism, white supremacist violence is often more connected to broader political disputes. The overlap with anti-government extremism, the white supremacist role in events like the January 6, 2021 U.S. Capitol insurrection, the increasingly globalized nature of the movement, and the often-racist rhetoric of leading political figures reinforce a perception that white supremacists are on the rise. In addition, much of the movement coordinates on social media, exploiting this relatively new technology to recruit and spread propaganda.

On June 10, the Brookings Institution’s Initiative on Nonstate Armed Actors will hold a panel discussion exploring the following questions: How large and acute is the threat?  What are the capacities and weaknesses of the movement? What has been the effectiveness of policies adopted to counter it and what else needs to be done?

After their remarks, panelists will take questions from the audience. Viewers can submit questions via email to events@brookings.edu or Twitter using #NonstateArmedActors.

Engineering value: The returns to technological talent and investments in artificial intelligence

The European Union AI Act: Next steps and issues for building international cooperation in AI

The European Union AI Act: Next steps and issues for building international cooperation in AI

A Path for University Reform

The Political Class Needs to Level with Us