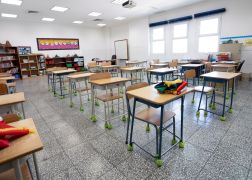 On March 11, 2020, the World Health Organization declared COVID-19 a pandemic. Underlining the seriousness of the situation, most countries shut their schools for months to minimize the spread of the coronavirus and to prevent hospital overcrowding. Two years later, students and teachers are returning to in-person education with some trepidation about the spread of coronavirus variants.

Educators, policymakers, parents, and students have worried about the impact of school closures on learning and socialization. World Bank Group President David Malpass said that the “pandemic has brought about the largest loss of human capital in living memory and the worst education crisis in a century.” Unfortunately, this large human capital loss could translate into large labor market impacts in the future.

The unseen nature of education losses

In many ways, the labor market impacts will be unseen. None of the currently affected students will look at their paystubs in the future and see a pandemic tax reduction. No national income account will reflect the size of the loss, even while it quietly accumulates over time. Yet the loss will be no less real for being unseen. French economist, politician, and journalist Frédéric Bastiat believed that it was one’s social responsibility to point out the unseen losses in public policy debates.

Fulfilling our social responsibility by measuring the future unseen impact of the pandemic-related school closures is not easy. Some of the main measurement difficulties come from the time lags between education shocks and their consequences—an issue identified by Alfred Marshall as long ago as 1890. The results of the education decisions today, whether made by policymakers or families, are by their nature properly measurable only after a long time, at which point often very little can be done to correct past mistakes. In other words, one needs to either be very patient or have an ingenious research design to measure the impacts.

Estimating the cost of schooling disruption: Top down and bottom up

Researchers often use models with a small number of variables to quantify the likely impact of COVID-19-related school closures on people’s future incomes. This top-down approach usually builds on informed assumptions about average lost years of schooling due to the pandemic, estimated returns to schooling, and other parameters, such as the mitigation effects of remote schooling. The approach reduces a complex world to rather simple aggregate models. But the complex features are often unknowable, making the top-down approach the best possible option for simulating future impacts of a shock (two examples of studies using this approach: one; two).

The key problem with the top-down approach is that it ignores bottom-up feedback effects: the mitigation factors that parents and students adopt when schools close. Even under normal conditions, families play a big role in educating children. But under extraordinary conditions like those of the pandemic, family arrangements tend to increase in importance. For example, mentoring by family members, private tutoring arrangements, and extracurricular online courses likely played an important, even though unknown, mitigating role during the pandemic.

A bottom-up estimate of the cost of the schooling disruption

A new World Bank paper uses a past episode of school closure—in Kuwait during the Gulf War (when Iraq invaded Kuwait)—to estimate the long-term impact of the current pandemic shock on affected students who will end up working in Kuwait’s civil service, the main employment choice for Kuwaiti nationals. The school closure due to the Gulf War is analytically useful because it happened almost 30 years ago, so all the bottom-up feedback effects on labor market outcomes have already been exhausted. This past closure also bears many similarities with the current pandemic-related school disruption, allowing us to estimate the lost salaries resulting from the pandemic-related education shock.

When Iraq invaded Kuwait and started the Gulf War, schools closed for the 1990/91 school year. As a result, many students in Kuwait lost access to formal schooling and only some students who emigrated could continue their education abroad. The following school year, when schools opened, was used to restore damaged school infrastructure and accelerate schooling to allow students to catch up. Nevertheless, the disruption led to lower attainment in terms of average years of schooling. The reduced attainment translated into long-run wage losses for affected Kuwaiti students.

The paper estimates that boys in elementary school during the pandemic-related school closures could face a salary loss of more than $2,600 per year, and girls could lose more than $1,500 per year (Figure 1). Over their working lives, the average present value of lifetime income reduction could be more than $40,000 for the boys and almost $21,000 for the girls. These are large losses. For context, civil service monthly salaries in 2019 imply average annual salaries of $62,000 for Kuwaiti men and $47,000 for Kuwaiti women.

Unfortunately, the findings are both reassuring and disturbing. They are reassuring because the order of magnitude of the estimated income losses is in line with the top-down studies. Disturbingly, however, the predicted losses are likely to be large and long-lasting, which places tremendous pressure on policymakers who struggle to contain the virus and grow their economies.

Ratifying Kigali: Can the U.S. go the distance on a global climate treaty?

Fernanda Barros: What can plant life history tell us?

The Business of Academic Cheating