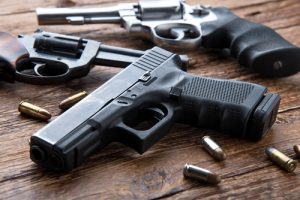 As calls to repeal the Second Amendment continue, Americans have been buying guns at a record pace. Over 1 million civilians purchased firearms in the month of May alone, marking a record-breaking streak of 34 months of increased sales. Although the left would like the world to believe that there are no restrictions on buying guns, the majority of people who applied were not eligible. The FBI reportedly conducted 2.4 million background checks last month alone.

Gun sales in Canada have spiked as well after tyrant Trudeau announced plans to ban sales under Bill C-21. Numerous gun shops reported selling out of handguns entirely after the PM announced that it will become illegal to buy, sell, transfer or import handguns anywhere.” There are 2,500 gun retailers in Canada, and all of those shops are expecting to go out of business within months if not weeks. Exactly 55,000 guns were imported into Canada last year, but that legal trade will be prohibited.

People want to feel protected. The underground market for guns will surge in Canada, and these guns will become untraceable. Criminals especially will find a way to buy and distribute firearms with zero restrictions. The ban will not erase demand.

The post Gun Sales Soaring in the US and Canada first appeared on Armstrong Economics.