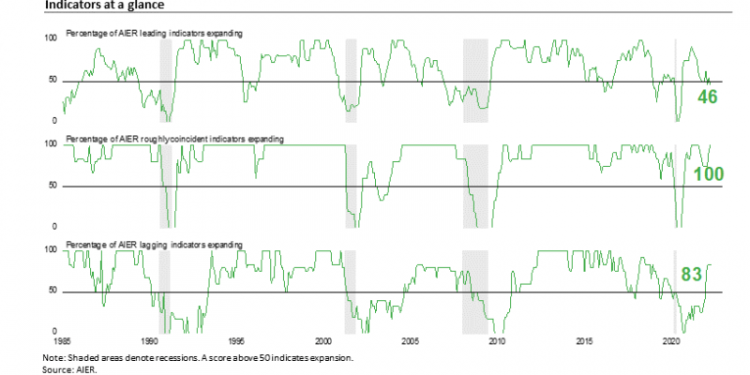 Despite a weak headline from the GDP report, domestic demand in the economy grew at a decent pace in the first quarter and the outlook is for continued growth, but risks remain elevated. Persistent upward pressure on prices, labor shortages and turnover, fallout from the Russian invasion of Ukraine, and new lockdowns in China in response to outbreaks of COVID-19 are among the most significant forces impacting the domestic and global economies and represent potential risks. A new Fed tightening cycle has begun in response to elevated rates of price increase, raising the risk of a policy mistake. While the strong labor market provides support for consumer attitudes, incomes, and spending, it also has the potential to fuel a wage-price spiral.

Increased volatility should be expected to continue in capital and commodity markets, the economy, and economic statistics over coming months. Also expect continued volatility for the AIER business cycle indicators. Caution is warranted.

The AIER Leading Indicators index reversed course yet again in April, losing 8 points to 46 after gaining 8 points in March. The April level of 46 is back below the neutral 50 threshold following a 54 in March. Over the last seven months, the Leading Indicators index has been above neutral twice, below neutral twice, and exactly neutral three times, putting the average reading over that time at 51.

AIER’s Lagging Indicators index was unchanged for the third consecutive month, holding at 83 in April. February through April was the best three-month run since a four-month run at 83 from July through October 2018. No individual indicators changed trend for the month. In total, five indicators were in favorable trends, one indicator had an unfavorable trend, and none had a neutral trend.

Lingering materials shortages, labor shortages and turnover, and logistical problems continue to slow the recovery in production across the economy and are sustaining upward pressure on prices. Upward price pressures have resulted in a new cycle of Fed policy tightening, raising the risk of a policy mistake. Furthermore, the Russian invasion of Ukraine and recent lockdowns in China in response to a new wave of COVID-19 have launched a new wave of potential disruptions to global supply chains.

The outlook is for continued economic growth, but risks remain elevated. Additionally, 2022 is a Congressional election year. Intensely bitter partisanship and a deeply divided populace could lead to turmoil as confidence in election results come under attack. Contested results around the country could lead to additional economic disruptions and government paralysis, again testing the durability of democracy. Caution is warranted.

Businesses added to inventory at a $158.7 billion annual rate (in real terms) in the first quarter versus accumulation at a $193.2 billion rate in the first quarter. The slower accumulation reduced first-quarter growth by 0.84 percentage points. The inventory accumulation helped boost the real nonfarm inventory to real final sales of goods and structures ratio to 4.00 from 3.87 in the fourth quarter; the ratio hit a low of 3.75 in the second quarter.  This is still below the 4.3 average for the 16 years through 2019.

Government spending fell at a 2.7 percent annualized rate in the first quarter compared to a 2.6 percent pace of decline in the fourth quarter, subtracting 0.48 percentage points from growth.

Categories were mostly higher for the month with ten up and three down in March. The gains were led by an 8.9 percent rise in gasoline spending. However, the average price for a gallon of gasoline was $4.40, up 19.8 percent from $3.68 in February.  General merchandise sales followed with a 5.4 percent increase while electronics and appliance store sales and sporting goods, hobby, and bookstore sales each gained 3.3 percent for the month.

Nonstore retailers led the decliners, down 6.4 percent, followed by motor vehicles sales, off 1.9 percent, and health and personal care store sales, down 0.3 percent.

New orders for nondefense capital goods excluding aircraft, or core capital goods, a proxy for business equipment investment, jumped 1.0 percent in March after falling 0.3 percent in February. Orders had risen for 11 consecutive months from March 2021 through January 2022 and have increased 21 of the last 23 months since April 2020. The results put the level at $80.8 billion, a new record high.

However, accelerating price increases have an impact on capital goods. In real terms, after adjusting for inflation, new orders for nondefense capital goods excluding aircraft – one of AIER’s Leading Indicators – were $41.2 billion in March, measured in 1982 dollars, a high level by historical comparison but well shy of the record high $49.2 billion in June 2000. The March result was a 0.8 percent gain for the month and is a 2.3 percent increase from a year ago. However, it is below the recent high of $41.5 billion in October 2021, putting the recent trend on a downward trajectory, resulting in a negative contribution to the AIER Leading Indicators index.

In nominal terms, every category in the durable-goods report showed a gain in March. Among the individual categories, electrical equipment and appliances led with a 3.9 percent increase, followed by computers and electronic products with a 2.6 percent rise, primary metals with a 1.5 percent gain, fabricated metal products, up 0.8 percent, and machinery orders, up 0.7 percent. Transportation equipment added 0.2 percent with motor vehicles and parts were up 5.0 percent, but nondefense aircraft was down 9.9 percent, and defense aircraft plunged 25.6 percent. From a year ago, every major category shows a gain.

Durable-goods orders continue to be strong, particularly the core-capital goods components, though a significant portion of the gain in nominal-dollar orders is due to price increases. Demand remains robust for the manufacturing sector, and the tight labor market creates incentives to substitute capital for labor. The pandemic may have accelerated structural changes to the economy, affecting labor, housing, manufacturing, and services.

Total housing starts rose to a 1.793 million annual rate in March from a 1.788 million pace in February, a 0.3 percent increase. From a year ago, total starts are up 3.9 percent. Total housing permits also rose in March, posting a 0.4 percent gain to 1.873 million versus 1.865 million in February. Total permits are up 6.7 percent from the March 2021 level. Both categories were led by multifamily housing.

Meanwhile, the National Association of Home Builders’ Housing Market Index, a measure of homebuilder sentiment, fell again in April, coming in at 77 versus 79 in March, but still at a somewhat favorable level. Overall sentiment remains positive, but rising mortgage rates, elevated home prices, and higher input costs are major concerns.

Input costs are a concern for builders, with lumber coming in at around $915 per 1,000 board feet in mid-April, down from peaks around $1,700 in May 2021 and $1,500 in early March 2022 while copper was holding at just over $10,000 per metric ton. The high input costs will pressure profits at builders and may lead to more price increases for new homes.

Furthermore, mortgage rates have rocketed higher recently, with the rate on a 30-year fixed rate mortgage coming in at 5.00 percent in mid-April, nearly double the lows in early 2021. Higher home prices and higher mortgage rates are likely to be significant headwinds for future housing activity.

After a pullback in activity in the first three quarters of 2021, single-family construction has shown renewed strength. While the implementation of permanent remote working arrangements for some employees may be providing continued support for housing demand, ongoing home price increases combined with the recent surge in mortgage rates will likely work to cool activity in coming months. Threats to future demand combined with elevated input costs are weighing on homebuilder sentiment. The outlook for housing is becoming more guarded.

Sales of new single-family homes fell in March, declining 8.6 percent to 763,000 at a seasonally-adjusted annual rate from a 835,000 pace in February. The March drop follows a 1.2 percent decline in February and a 3.0 percent drop in January. The three-month run of decreases leaves sales down 12.6 percent from the year-ago level. New home sales surged in the second half of 2020 but then slowed sharply in the first three quarters of 2021, hitting a low of 667,000 in October. Following the October low, sales posted two strong gains in November and December but have reversed some of those gains in the first quarter of 2022. Meanwhile, 30-year fixed rate mortgages were 5.11 percent in late April, up sharply from a low of 2.77 percent in August 2021.

The median sales price of a new single-family home was $436,700, up from $421,600 in February (not seasonally adjusted). The gain from a year ago is 21.4 percent versus a 16.5 percent 12-month gain in February. On a 12-month average basis, the median single-family home price is still at a record high while the gain from a year ago in the 12-month average is 19.3 percent.

The total inventory of new single-family homes for sale rose 3.8 percent to 407,000 in March, putting the months’ supply (inventory times 12 divided by the annual selling rate) at 6.4, up 14.3 percent from February and 52.4 percent above the year-ago level. The months’ supply is at a relatively high level by historical comparison and is substantially higher than the months’ supply of existing single-family homes for sale. The relatively high months’ supply and surge in mortgage rates may be among the reasons for slowing gains in the median home price. The median time on the market for a new home remained very low in March, coming in at 3.0 months versus 2.9 in February.

Can We Revive the Old Constitution?

Can We Revive the Old Constitution?

Independence and impact in contemporary America

From vision to design in advancing Medicare payment reform: A blueprint for population-based payments

What is Market Urbanism?