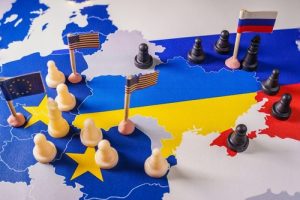 As the war in Ukraine continues, so does the need for funding. Zelensky’s people are now asking for $7 billion in funding per month. The World Bank estimates that it will cost $60 billion to rebuild Ukraine’s infrastructure and the war is still ongoing. Managing Director of the IMF Kristalina Georgieva said they secured the $7 billion in funding for two months already with funds from other nations. Who will pay for the rest?

The $60 billion estimate is over three times the amount of Ukraine’s GDP. They could never recover on their own. Some would like to use the forfeited assets of Russian oligarchs to fund the war. US Treasury Secretary Yellen warned that doing so would be a “significant step” that would require careful consideration among nations. This yet again brings NATO members one step closer to fully entering the war.

Former hedge fund manager Bill Browder, who has advocated freezing oligarch’s funds, also once warned long ago not to tamper with the oligarch’s funds after seeing their retribution firsthand. “You don’t want to take [the oligarchs’] money because if you lose it, they’ll kill you,” Browder stated. Hedge funds are now required to freeze the assets of Russian oligarchs but have not received direct advice on how to manage those frozen assets. This leaves funds open to future lawsuits if not violence if the sanctions are ever lifted. Some are pointing to the hedge funds and private management companies for collecting the money in the first place, regardless of whether it was earned in a perfectly legal manner.

For all intents and purposes, the people who lost their life savings are mostly private citizens who have been a victim of circumstance. They did not fund Russia’s invasion. This could be considered an act of war by Russia for it would certainly be a complete violation of international law. Using assets seized by private citizens to fund a war opens the door to a new form of warfare that will only cause people to refrain from investing in countries that allow this to go on. Welcome to the total collapse of globalization. We are staring into the eyes of a Great Depression that would make the 1930s look like a dress rehearsal.

Georgia confiscated the property of people who supported the king during the American Revolution. Because of that, Georgia remains one of the poorest states for it took over 100 years before capital began to return to Georgia.