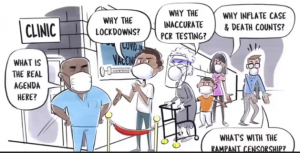 Democrats in Rhode Island have prepared legislation that could double taxes for parents of unvaccinated children. Senator Sam Bell, who is championing the bill, claims that there is a need for a universal mandate. Under the proposed law, unvaccinated residents would face a $50 monthly fine for noncompliance. Employers would also be required to mandate vaccines for all employees or face a $5,000 fine per violation. The biggest burden – “Any person who violates this chapter shall be required to pay a monthly civil penalty of fifty dollars ($50.00) and shall owe TWICE THE AMOUNT OF PERSONAL INCOME TAXES.”

To receive an exemption for a minor, three separate doctors must confirm that the child is “not fit for immunization.” Then the state would need to investigate each claim and determine whether or not the parents should be financially ruined. So even if three different doctors say that a child should not be vaccinated, the state may override them.

Biden lost his bid to implement a federal vaccine for employers last year, but the battle is not over. State lawmakers still have the capabilities to force compliance through any means possible. Bell wants to make the state of Rhode Island unlivable for the unvaccinated. While this is unlikely to pass, the fact that they are still attempting to force vaccinations in April 2022 shows that the war on medical freedom has not ceased.

Inflation could wreak vengeance on the world’s poor

Cryptocurrency could help governments and businesses spy on us