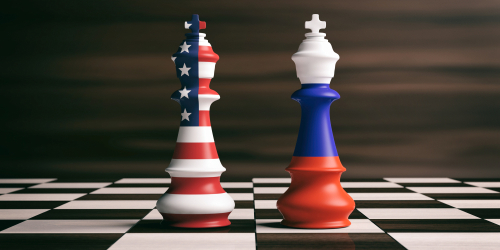 The revelations pouring out from John Durham are very enlightening which have confirmed that the Democrats for four years led by Hillary Clinton, set in motion the strategy to constantly attack Trump and thereby prevent him from carrying out his goal to drain the swamp. John Durham has revealed that “A secret Trump server is communicating with a Russian bank” was a total fictitious claim put out by Hillary which had no basis in fact whatsoever. It was just totally made up.

In a new filing, Durham revealed that the CIA concluded that cellphone data and Internet traffic provided by Clinton attorney Michael Sussmann was “not technically plausible” and “user created.” This proved to be deliberately fabricating evidence which was the same strategy behind the notorious Christopher Steele dossier, in which they also fabricated facts. Of course, the CIA was against Trump as was the NSA because they were on the agenda of creating a war with Russia.

Despite all of this evidence that is surfacing, still, those on the left continued to ignore these facts and will not relent when it comes to bashing Trump and are happy that countless people will die with this war agenda. COVID death claims will prove to be nothing compared to this Agenda of war. Clinton’s team simply invented the entire story, forged evidence, and then presented it to the FBI and CIA as if it was something worth pursuing, derailing a presidency for years.

The Director of the CIA, John Brennan, a former aide and campaign advisor to President Obama, had stated that his agency believed the Russians were behind the hacking of the Democrat’s servers. He took fabricated that evidence for the hack was a simple phishing email we all get – not sophisticated. The entire proposed Russian hack was really simply gained by a fake email saying reset your password known as a phishing email. The report concluded that the Trump campaign did not conspire with Russia during the 2016 election, according to the letter from Barr to Congress. That was the Muller report.

The Democrats even blamed Wikileaks and pushed to imprison Julian Assange for life. WikiLeaks denied that Russian hackers were the source of the emails. Assange will NEVER get a fair trial under any Democratic administration. But the Democrats were relentless. Trump disagreed with the CIA claim, tweeting that “these are the same people that said Saddam Hussein had weapons of mass destruction.” Now the Durham report demonstrates that the CIA lied and also misled the nation cascading our country toward war.

There is a serious question if all of these characters have not engaged in treason against the United States. These people will be remembered by History and held in the same regard as Benedict Arnold by future generations when the dust settles. Their names will become synonymous with “traitor” as was the case with Benedict Arnold when his betrayal became public. Benjamin Franklin wrote that “Judas sold only one man, Arnold three millions.” However, these people have done far more damage than merely creating Russiagate.

Because of these people, in 2019, Gallup Poll showed that the majority of Americans had considered Russia as a critical threat that is mandatory to justify waging war. The nonsense of imposing the sanction on Russia under the theory that will force the people to overthrow Putin is simply the product of a twisted deranged mind. Now two-thirds of Russians see the United States as the enemy of Russia. The independent Levada Center published a poll confirming that 70 percent of respondents pointed to the United States as the greatest threat to Russia. Perfect! They have got the people on both sides to view the other as the great evil of today.

These attitudes have been the byproduct of Russiagate. This is HIGHLY dangerous for the Neocons will get what they dream of – World War III. These people have put out nothing but hatred and this is unfortunately what we the people of the world, Americans and Russians, are the victims of these hateful manipulations of society to press their desire for war. The challenging question is one of physiological importance. Why do these people always just want endless war? Neither Russia nor China is Communist. Where is all this hate coming from that will propel the world into chaos and war?

Hillary is a Neocon. She thinks that the Ukrainian people are just cannon fodder. Americans are tired of endless wars so they need to have as many Ukrainians killed to still the masses in America to rise up and slaughter Russians. Hillary would have been disastrous as president. She is still very much behind this desire to create World War III. The difference, is she wants to draft girls and send them also to die on the battlefield for what?

Businesses Are Victims of Gentrification, Too

The women of Sudan will not accept setbacks