Services-Sector Growth May Have Slowed in December 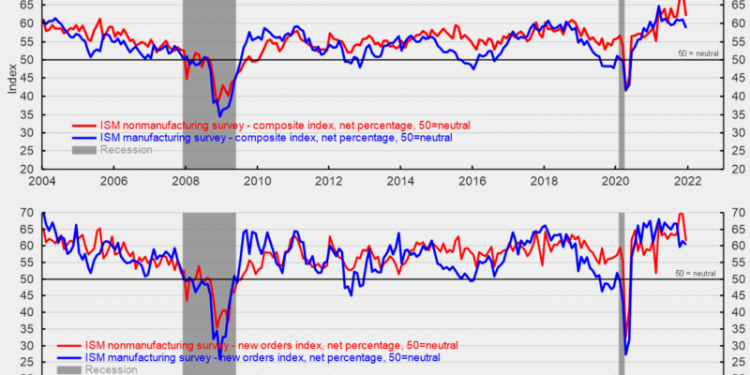 The Institute for Supply Management’s composite services index fell to 62.0 percent in December, falling 7.1 points from 69.1 percent in the prior month. The index remains above neutral and suggests the 19th consecutive month of expansion for the services sector and the broader economy (see top of first chart). However, the decline in the latest month suggests that growth may have been somewhat less robust. Compared to the manufacturing sector, the decline was more severe though the level of the index remains above the manufacturing-sector index (see top of first chart).

Among the key components of the services index, the services new-orders index fell to 61.5 percent from 69.7 percent in November, a drop of 8.2 percentage points from November (see bottom of first chart). New orders have been above 50 percent for 19 months and above 60 for the past ten months – a strong performance overall. For December, 13 industries reported expansion in new orders in December while three reported drops. Manufacturing new orders ticked down in December and was trending near 60 percent, a still-healthy level but down from readings around 65 from August 2020 through September 2021 (see bottom of first chart).

The nonmanufacturing new-export-orders index, a separate index that measures only orders for export, increased to 61.5 percent in December versus 57.9 percent in November. Six industries reported growth in export orders against five reporting declines. Backlogs of orders in the services sector likely grew again in December though the pace may have slowed as the index remained above the neutral 50 level but decreased to 62.3 percent from 65.9 percent. Backlogs of orders have grown for 18 of the past 19 months. Eleven industries reported higher backlogs in December while six reported a decrease.

The business-activity index (comparable to the production index in the ISM manufacturing report) decreased to 67.6 percent in December, down from 74.6 percent in November, a decline of 7.0 points (see top of second chart). This measure has been above 50 percent for 19 consecutive months. For December, 15 industries in the services survey reported expansion versus three reporting contraction. For the manufacturing sector, the production index ticked down in December and remains in a sideways trend around 60, a strong reading but down from the 62 to 68 range from August 2020 through April 2021 (see top of second chart).

The services employment index remained above the neutral 50 percent level, coming in at 54.9 percent in December, down from 56.5 percent in November, and a generally healthy level by historical comparison (see bottom of second chart). Eleven industries reported growth in employment while three reported a reduction.

The manufacturing employment index posted a 0.9-point increase to 54.2, also a solid reading by historical comparison. Improvement in these indexes could be a sign that companies are attracting and retaining needed employees.

Supplier deliveries, a measure of delivery times for suppliers to nonmanufacturers, came in at 63.9 percent, down sharply from 75.7 percent in the prior month (see top of third chart). It suggests suppliers are falling further behind in delivering supplies to services businesses, but the slippage has decelerated significantly from the prior month. Still, the index remains elevated. Fifteen industries reported slower deliveries in December while none reported faster deliveries.

There was also a sharp decline in the manufacturing supplier deliveries index, falling 7.3 points to 64.9 percent (see top of third chart). The sharp declines in both could be early favorable signs that some of the upward price pressures may start to ease.

The December report from the Institute of Supply Management suggests that the services sector and the broader economy expanded for the 19th consecutive month in December. Respondents to the survey continue to highlight robust levels of activity and strong demand but also continued price pressures, materials shortages, logistics, and transportation issues, and challenges hiring and retaining workers, but the declines in some of the survey indexes suggest some of the issues may be starting to ease.

Some Frustrating Economics in the Wall Street Journal

Infrastructure in the developing world is a planetary furnace. Here’s how to cool it.

Education meets the metaverse: The promise and the worry